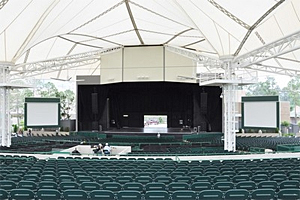 The Cynthia Woods Mitchell Pavilion
The Center for the Performing Arts at The Woodlands, near Houston, TX.

Phone: 281-363-3300
Fax: 281-364-3011
The Cynthia Woods Mitchell Pavilion is a well known outdoor amphitheater in The Woodlands that provides the Greater Houston region with an array of first-class performing arts and contemporary entertainment. It is surrounded by lush trees in the Town Center area and is bordered by the Market Street Shopping Complex and The Woodlands Waterway. This Non-Profit Organization opened in April 1990 and has hosted an array of performances such as Cher, Elton John, Britney Spears, Rod Stewart, Bette Midler, The Houston Symphony and the Houston Grand Ole Opera just to name a few. Every year from March - November it hosts about 75 events ranging in style from rock to classical, country to jazz and modern opera to contemporary American ballet.
The Woodlands Amphitheater prior to closing out the 2008 season was struck by Hurricane Ike causing the concert hall to be closed due to the great damage. Since then it has been renovated and reopened to increase their white fabric covered reserved seating capacity to nearly 6,500, including several additional boxes. The overall capacity of the venue remains about the same at 16,500 including a lawn capacity of about 10,000.

Hotels near The Pavilion

Other Events in The Woodlands