12»
« Back
This discussion has been locked. 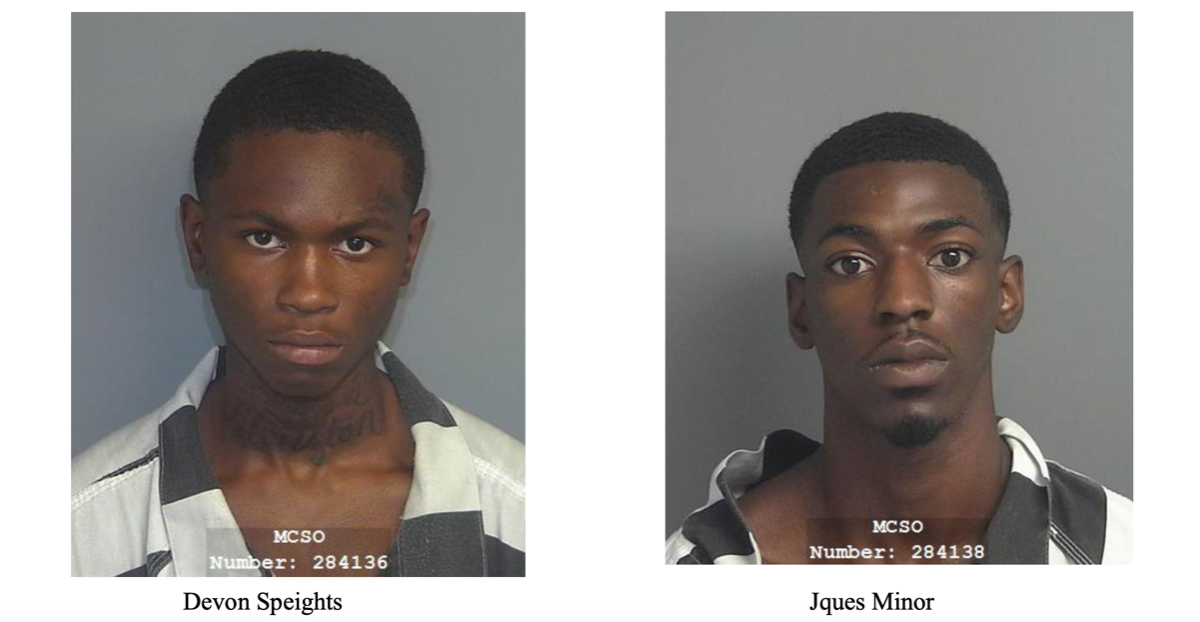 According to reports from MCSO, on August 2, 2019, at about 2:12 am, The Montgomery County Sheriff's Office received a call from a victim who lives in the 100 block of Eagle Rock, The Woodlands, TX advising he caught a black male inside of his car. The victim advised that the male suspect took off running and he gave chase. The victim advised the suspect jumped into a truck that was parked down the road waiting on the suspect. The victim also advised the suspect truck crashed into a vehicle that was parked on the street.The victim gave chase providing law enforcement with the location of the suspect truck. During the chase, the victim struck the rear of the suspect's truck with his vehicle. Law enforcement from multiple agencies caught up to the suspect vehicle at the intersection of Robinson Road and Maplewood Dr in Oak Ridge North. Deputies detained both occupants identified as Jques Minor (B/M) 19 years of age and Devon Speights (B/M) 18 years of age. Both suspects are from the Houston area.During the investigation, Deputies discovered that the truck the suspects were driving had been reported stolen by Sugarland Police Department. Deputies with the Montgomery County Sheriff's Office also learned the suspects could be linked to multiple burglaries in the City of Sugarland. The Montgomery County Sheriff's Office and the Sugarland Police Department are working together to determine how many burglaries these suspects have committed and to return any property to their owners.Both suspects were transported to the Montgomery County Sheriff's Office Jail. Minor was charged with burglary of a motor vehicle and Speights was charged with unauthorized use of a motor vehicle.This is still an active investigation and involves multiple law enforcement agencies.www.facebook.com/MCT XSheriff/
Reply
What are your thoughts? Log in or sign up to comment Log in » Sign up »

~ 12 mos ago   Aug 09 2019, 6:41am
Well, next time there is a mass shooting, wait to see how long it will take for them to tell you it's a W/M...
If there are any criminals around in my neighborhood, close to my kids, I want my neighbors and police to describe them as much as possible, as detail as possible to me, don't you? I want to know their skin color, hair color, eye color, cloth color, shoe color, mustache color, car color, ..., ..., ... Because my kids/family is more important to me than hurting anybody's "feelings", don't you think?
Reply

~ 12 mos ago   Aug 09 2019, 7:02am
@FairManor : Yes I agree in that case 100% but no need when they were caught and their photo described them, why didn't they describe the white criminals as white males on the other posts.. I believe in the same treatment for all, no discrimination! Don't you Agee?
Reply

~ 12 mos ago   Aug 09 2019, 7:20am
@SnowWhite : You probably forgot something when you are younger and even now: in many cases, police bulletin is transmitted through radio and text messages. Therefore, the receiving party may not be able to see any pictures.
If you don't like color, we can use numbers. For example, from 0 to 10 represent skin color tone: 0 is white and 10 is black. So instead of B/M, we say 10/M. How about that?
Reply

You are making this difficult for me to think this time of the morning lol!
Let's put it like I saw it, it need not be on a written post , it's still not fair when not used for white people as well, no matter how you say it, I think I am right on this one😁
Reply