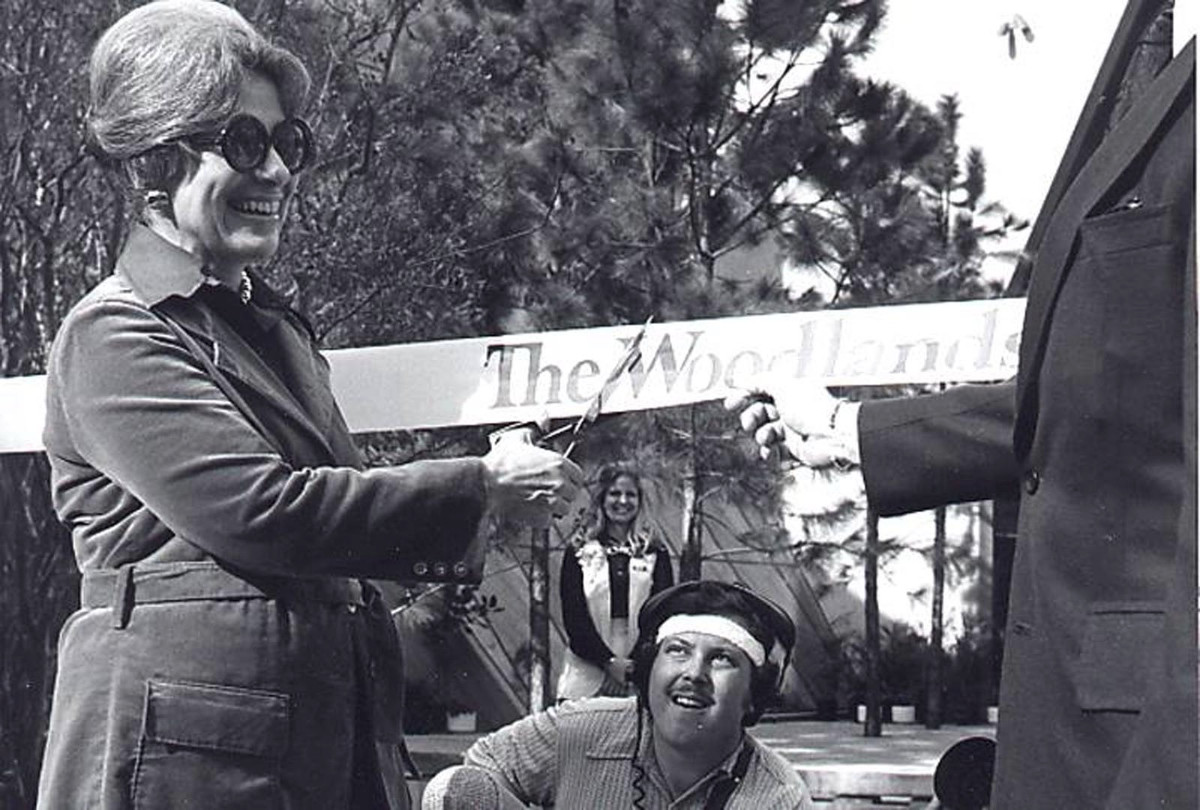 From The Woodlands.com:On October 19, 1974, The Woodlands celebrated its grand opening. As the creation and vision of founder George Mitchell, this monumental moment was commemorated by a ribbon-cutting ceremony officiated by his wife, Cynthia Woods Mitchell, marking the birthday of our great hometown.Forty-five years later, The Woodlands is a premier master planned community, serving as a benchmark example for other communities across the nation.In the beginning, the initial flurries of The Woodlands began with the construction markings on dirt roads for what would become Woodlands Parkway. As a major artery today, its humble beginnings were only a few blocks of paved roads west of Interstate 45 at the time. Soon, neighborhoods were established in the Village of Grogan's Mill that included single-family homes and charming townhomes. The Woodlands Resort was later developed which included a golf course. The "Wharf" soon opened, offering residents a boutique grocery store, shops, and an ice rink. In 1990, The Cynthia Woods Mitchell Pavilion was added followed by The Woodlands Mall in 1994.Throughout the decades, eight more villages were developed, providing an abundance of choices for residents to call home, mixed with forest preserves and natural open spaces.Today, The Woodlands boasts a population of more than 117,000 people, a thriving economic hub with many large companies a workforce of nearly 68,000 people, a mini-medical center with five top-notch hospitals and a cancer treatment center, top-rated school districts and higher education. The Woodlands also features world-class shopping and entertainment facilitated by the development of Market Street and the award-winning Hughes Landing. Plus, The Woodlands is home to the world-renowned Cynthia Woods Mitchell Pavilion, one of the top-selling outdoor amphitheaters in the world.It is known as one of the best places to live in Texas and is one of the top-selling master planned communities in Texas and the nation."We are proud to mark the forty-fifth anniversary of The Woodlands," said Heath Melton, Senior Vice President, MPC, Residential Development for The Howard Hughes Corporation. "Over the decades, it has evolved into a thriving place live, work, play, and discover. We strive to maintain Mr. Mitchell's original vision and have advocated endeavors for environmental preservation and social consciousness. The Woodlands community is truly a hometown for its residents and future generations to come."www.thewoodlands.com /community/news/45th -birthday.html?fbcli d=IwAR2ESidNI9X
Reply
What are your thoughts? Log in or sign up to comment Log in » Sign up »

~ 7 mos ago   Oct 21 2019, 1:09pm
@TheWoodlandsTXDotCom : Happy B-DAY Woodlands!!! What a visionary George Mitchell was. I do wish it had not gotten quite so big and busy though, I prefer how it was when he was still around. But you cannot stop progress and change is inevitable in our world.
Reply

~ 7 mos ago   Oct 21 2019, 1:28pm
Anywhere we can find more history? I over heard some rumors over the years and don't really know if they are true/false. For example:1. Woodlands used to be a swamp, the whole area have to be raised to build houses on it. The reason it's clay under your house, not original soil (I can verify this);2. Mitchell originally bought this land for oil. After they tried to drill and failed, they decided to use it for other purpose. Each village center locations are their drilling sites;3. (please add your own...)
Reply

~ 7 mos ago   Oct 21 2019, 1:42pm
@FairManor : Love it! As with anything with considerable history attached to it, and an air of elitist enigma to go along (especially with the Woodlands), legends and rumors are bound to run wild. What better way to spend the winter than sipping on red 🍷 around the 🔥 place, gosipping about these rumors, and maybe even spinning off some newfound tales? 😂
Reply

~ 7 mos ago   Oct 22 2019, 7:22am
@TheWoodlandsTXDotCom : Mitchell was a True visionary! We were fortunate to have moved here before it was sold and things changed. It is such a wonderful community and we have been proud to say that we raised our family here after moving so many times early on!
Reply

~ 7 mos ago   Oct 23 2019, 7:33am
@Starlight13 : He probably would not like as much deforestation and the crowdedness in some areas.
He truly had a vision that people could work, live and play in the same area. The Woodlands has employment for as many people approximately equal to the population. The parks and trails offer a vast number of experiences from splash pads to floating in a kayak down spring creek. The trails can get you from the East Shore to the far reaches of Alden Bridge. There are homes at many price points. So to answer your question, I think he would be pleased to see his vision carried on but unhappy about certain aspects that have come with it. I do believe that the estimate for growth was about 120 thousand.
Reply

New Member
~ 7 mos ago   Oct 23 2019, 6:00pm
*Edited
@Starlight13 : The Mitchell group was interested in a major development when the timber land became available . At that time, there was a Federal-Urban Development program to design and found new towns. Sponsored by the U.S. Department of Housing and Urban Development. When accepted, the project could apply for aide to furnish the infrastructure. Such items as planning, sidewalks, school dedication and police and fire facilities. Each year or so we would apply to renew or add to the original application. The program allowed for diversity and low income housing and education. It also provided for public arts and communication.There were several other cities accepted in the program. Reston, VA West of DC in Washington. I believe that Rancho Bernardo is also a new city project. Mobil Oil was the owner of the Reston DC project land.The Woodlands geology is not a productive area for oil & gas production. Mr. Mitchell has interests in the areas further North and some in Galveston Bay. A good person to interview would be his family. Perhaps Scott Mitchell, the architect.Once the I-45 highway was finished, the North of Houston was an obvious target for development. The land around Greenspoint and Conroe was secured by Exxon and MND as cattle grazing land before it was fully developed. The timber was the asset here in The Woodlands. Trees are valuable . Subsequently telephone pole processing lots sprang up. Now they are Super Fund sites.. pentachlorophenol is the toxic solution coating the asphalt laden telephone poles. It is now recognized as a carcinogen .Oil companies have dozens of engineers and mechanical people. It is natural to use them to gather land.. engineer it for cattle or human use prior to mineral devolpment. They are brilliant at controlling Water and traffic and infra structures..in long term projects. ie Kingwood et al golf courses... surveying and mapping services.Others:
New communities sponsored by the U.S. Department of Housing and Urban Development after 1970[edit]Cedar-Riverside, Minnesota - Minneapolis, Minnesota
Flower Mound, Texas - near Dallas, Texas
Gananda, New York - near Rochester, New York
Harbison, South Carolina - near Columbia, South Carolina
Jonathan, Minnesota - near Minneapolis
Maumelle, Arkansas - near Little Rock, Arkansas
Newfields, Ohio - Dayton, Ohio
Park Forest South, Illinois - near Chicago, Illinois
Radisson, New York - near Syracuse, New York
Riverton, New York - near Rochester, New York
Roosevelt Island, New York - part of New York City
Shenandoah, Georgia - near Atlanta, Georgia
Soul City, North Carolina - Warren County, North Carolina
St. Charles, Maryland - Charles County, Maryland
San Antonio Ranch, Texas - near San Antonio, Texas
The Woodlands, Texas - near Houston, Texas
Reply

~ 7 mos ago   Oct 23 2019, 7:27pm
There should be a museum something about this, in case people know all die and next generation believe Woodlands is just part of Houston...
Reply

~ 7 mos ago   Oct 23 2019, 8:31pm
There should be a museum something about this, in case people know all die and next generation believe Woodlands is just part of Houston...
@FairManor : Good point. It's important to do these things for posterity's sake. Otherwise you'll end up with a bunch of ill informed next gen millennials trashing and desecrating the history of this place.
Reply

~ 7 mos ago   Oct 23 2019, 9:41pm
The one thing I find sad about this town is looking at Howard Hughes signature everywhere, that's as close to him as I will get, would love to have met him.
Reply
Post a comment »